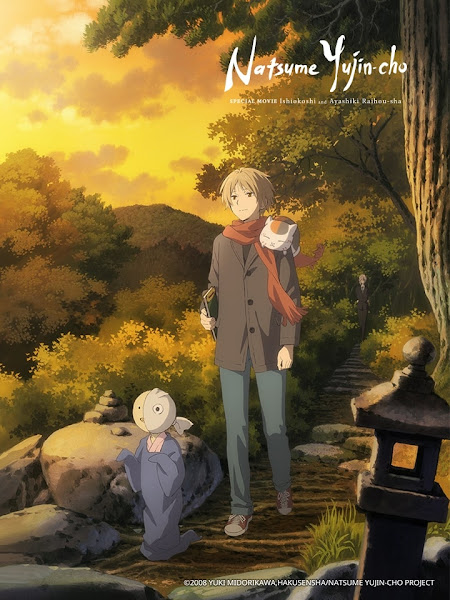 Natsume's Book of Friends: The Waking Rock and the Strange Visitor

Ishi Okoshi
While searching for Nyanko-sensei, Takashi Natsume encounters meek and small-looking youkai Mitsumi. Mitsumi was entrusted by his leader Gantetsu, a powerful and strong ayakashi, to be the year’s “Ishi Okoshi,” whose role consists of waking him from his deep slumber. Seeing how much Mitsumi wants to prove himself as Gantetsu’s worthy servant, Natsume decides to help him fulfill his task. However, time is running out—for they are not the only ones who want to awaken the divine being.

Ayashiki Raihousha
One day, Natsume’s friend Kaname Tanuma is visited by a strange man. In the subsequent days, the visitor briefly talks with Tanuma and leaves. Natsume soon discovers that the outsider is a youkai disguised as a human, who claims to bear no danger. Despite trusting the youkai, Tanuma’s health slowly begins to deteriorate, causing Natsume to become more suspicious of the interloper. What is the truth of his sudden appearance and his connection with Tanuma?