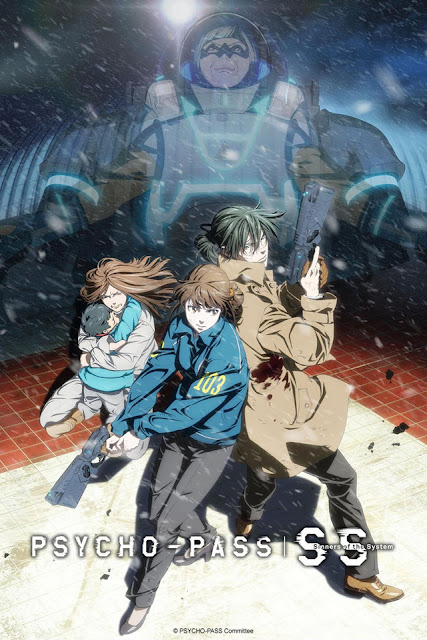 Psycho-Pass: Sinners of the System

A runaway vehicle driven by Izumi Yasaka, en route to the Public Safety Bureau building, is reported shortly before it crashes into the building. Izumi is a counselor who recently ran away while working at a latent criminal isolation and rehabilitation facility known as Sanctuary.

Before Inspectors Mika Shimotsuki and Akane Tsunemori get to interrogate the suspect, a sudden request is issued from the facility to promptly bring Izumi back. Interpreted as a direct order from the Chief and the board at Sanctuary, the Inspectors obey, but insist that Izumi be escorted back personally. Tsunemori intends to investigate further with the rest of the team at the Bureau.

Now Inspector Shimotsuki has finally been given the opportunity she had been waiting for—to be the primary investigator on an important case. This case follows Shimotsuki and her team of Enforcers as they uncover the secrets of Sanctuary.

Enforcer Teppei Sugou, former ace pilot of the National Defence Army’s 15th Integrated Task Force, is visited by a scout from the Ministry of Foreign Affairs and invited to rejoin the military. While considering the offer, he recalls his last months of service.

His last mission, Operation Foot Stamp, had been a highly classified military strike against the Southeast Asian Union. The operation quickly went south for the ground forces, and Sugou’s First Guardian drone was ordered in as air support to drop emergency supplies for the ground units and then return to base. Following orders against his own judgement, Sugou abandoned his comrades on the field.

Many lives were lost during the operation, including Itsuki Otomo, Sugou’s commanding officer. However, three months later, following a massacre at the Ministry of Defence, Otomo was spotted at the scene on camera. Now a suspect in an act of terrorism, Sugou cooperates with Enforcer Tomomi Masaoka and CID Division One as they hunt his former mentor down.

Case.3 – On the Other Side of Love and Hate

Shinya Kougami continues to wander the Southeast Asian Union (SEAUn) away from the eyes of the Sibyl System in Japan. While travelling through the Tibet-Himalayan Alliance Kingdom, Kougami encounters Guillermo Garcia—commander of a paramilitary group attempting to unite the local factions and bring peace to the war-torn nation. Wary of joining another mercenary group, Kougami declines to join his cause, but agrees to be driven to the nearby Tibetan capital by one of Garcia’s men.

However, Kougami’s plan to remain uninvolved is short-lived when a bus of refugees are ambushed by armed guerrillas. Among them is a half-Japanese, half-Tibetan girl named Tenzing Wangchuck. Impressed with Kougami’s fighting prowess as he single-handedly takes the attackers out, Wangchuck requests him to teach her how to fight so she can take revenge against the warlord who murdered her family.

Knowing first-hand that there’s no turning back to the person you were once you take a human life, Kougami is initially reluctant to accept her request. But faced with the girl’s desire for vengeance that mirrors the haunting abyss inside his own heart, will he train her?