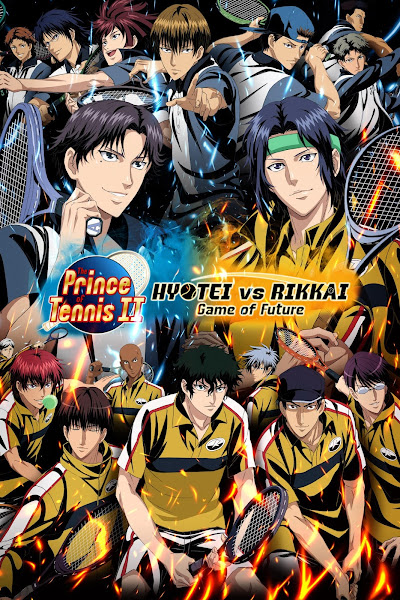 The Prince of Tennis II: Hyotei vs Rikkai Game of Future

Shin Tennis no Ouji-sama: Hyoutei vs. Rikkai - Game of Future

The Atobe Group is establishing a new tennis court in Kanagawa and is planning to celebrate its opening with an exhibition match. Hyoutei Academy’s tennis team captain, Keigo Atobe, nominates the best team in the region to participate: Rikkai University-Affiliated Middle School. On behalf of the Rikkai tennis team, Seiichi Yukimura accepts the challenge to showcase the prowess of its members.

Amidst tense preparations, the third-years of Hyoutei supervise next year’s captain, Wakashi Hiyoshi. At the same time, the third-year members of Rikkai begin to worry whether Akaya Kirihara, the team’s lone second-year member, can lead the club to glory once again. Determined to overthrow their respective captains’ legacies during the match, both Hiyoshi and Kirihara continue rigorous training to prove they have what it takes to succeed them.

The future of Hyoutei and Rikkai rests on the shoulders of these second-year aces, who harbor high expectations and ambitious goals. Emboldened by their endeavors, the third-years of each respective team impart their feelings to the second years that will be carrying the torch for their schools once they graduate.